The previous version of the platform had a game set of 5 games. These games have been developed over the Torque game engine fulfilling a framework of criteria required for rehabilitation games [AvilesArriagaHH2011]. In addition, GT platform is also capable of functioning with Hocoma’s T-Wrex system games.

The user must ”turn” a steak in a grill before it burns. The steak is burning in a grill and as time passes it changes its colour to a darker brown. A virtual hand must touch (i.e. turn) the steak to prevent it from burning. Once the steak is touched, a new steak appears somewhere else in the grill. The distance at which the new steaks appear is automatically selected by the adaptation module. The timing it takes before the steak burns can be adjusted. The game focuses in an abduction/adduction movement of the arm. This game is thought for early therapy. 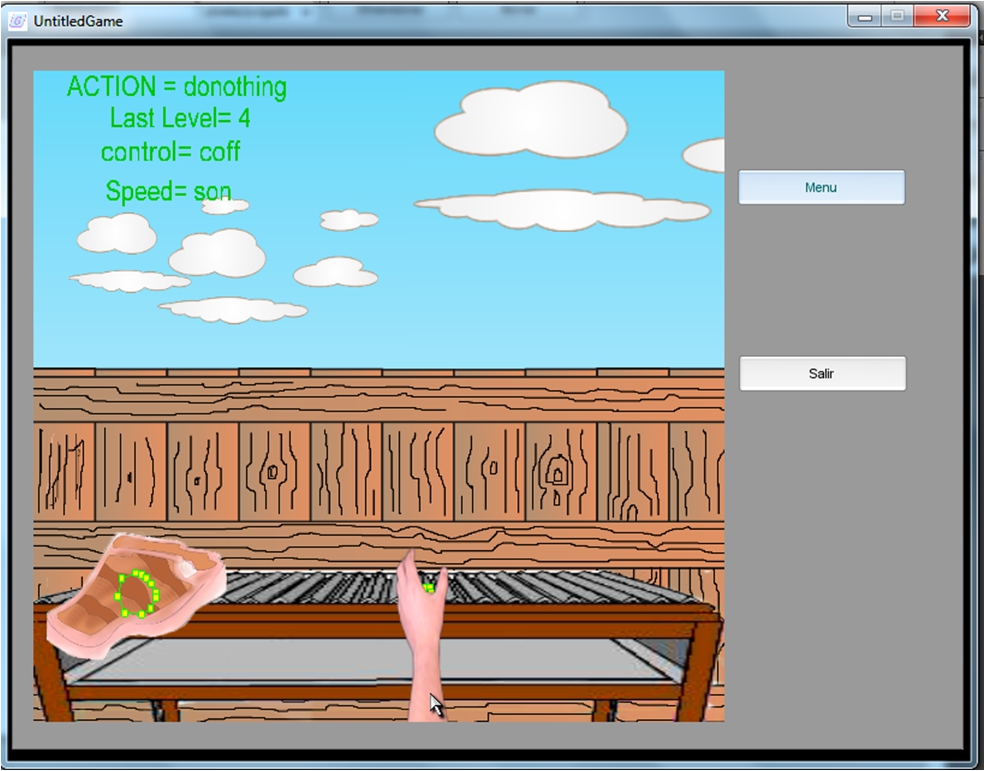 In this game the patient tries to kill a buzzing mosquito which approaches at different heights. The task goal is to kill the mosquito before it comes too close to the hand. The patient is armed with an insecticide sprayer that s/he must align in height with the mosquito and then press the gripper to spray the insecticide. The mosquito speed and the pressure necessary to spray are configurable parameters. The vertical distance at which the next mosquito appears is dictated by the adaptation policy. The game favours elevation/depression movements and gripping. 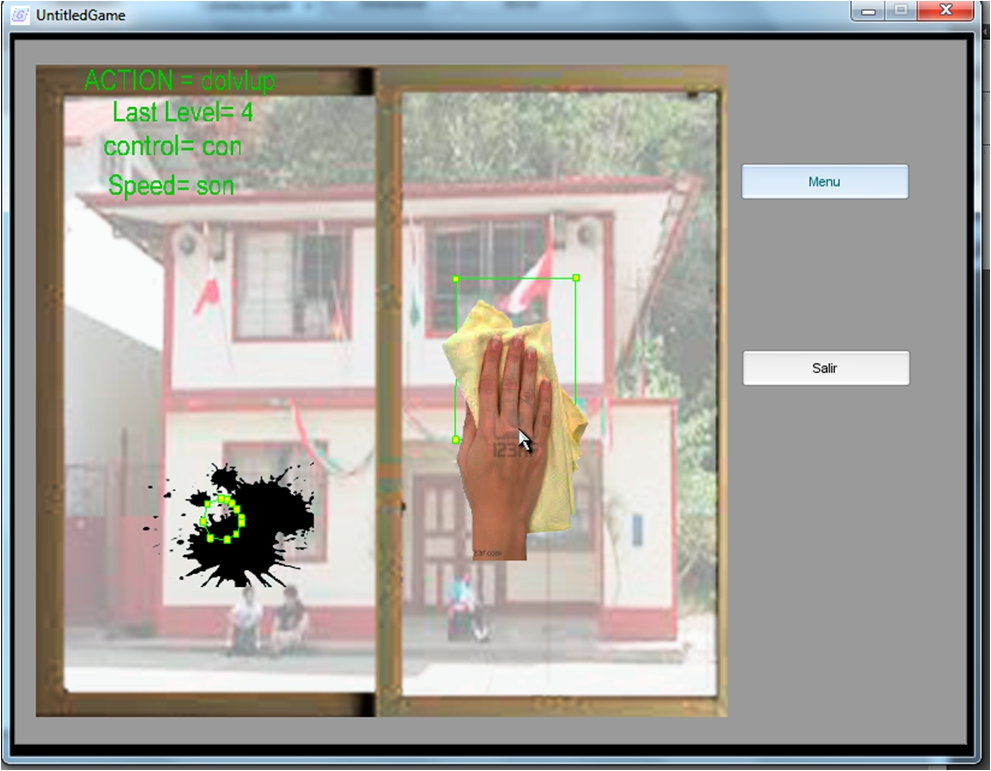 A hand holding a cloth wipes a window glass to remove stains. As the old stains are wiped, new stains appears randomly over the window. Game difficulty is modulated by means of the distance at which the new stains appears. Similarly to the game steak the aim is to touch the goal, in this case the stain, but differently from the steak game the allowed movement in this game is two-directional; abduction/adduction and elevation/depression. This is thus a game for late rehabilitation. 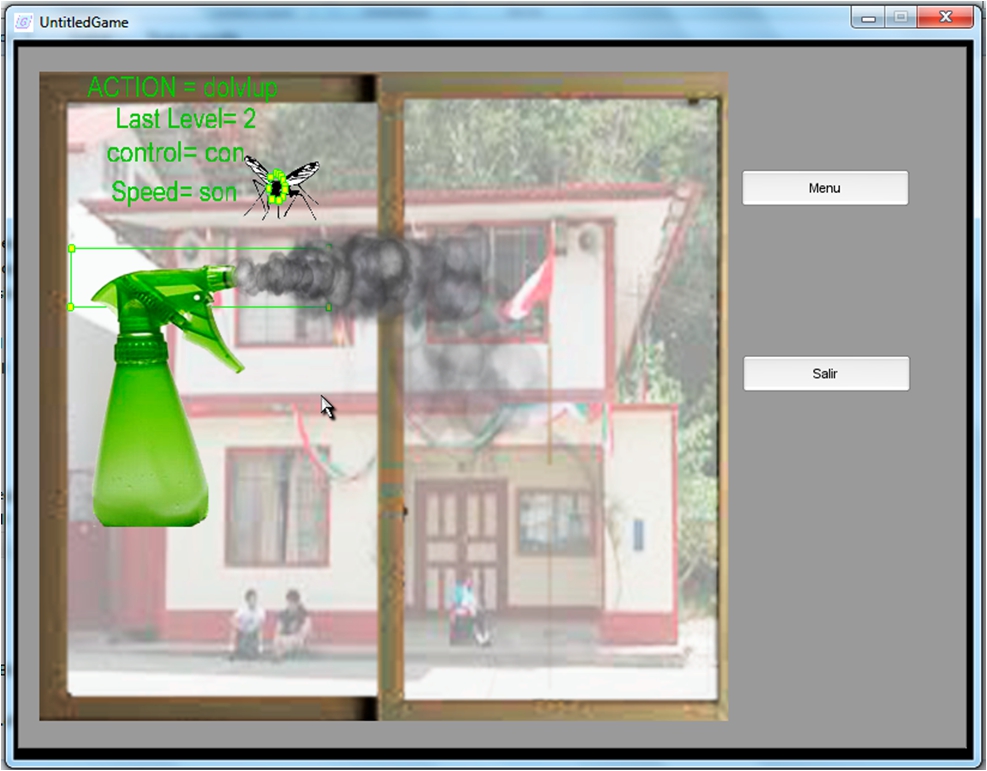 Spiders on the wall

In this game the patient armed with a hammer as an unlikely tool for killing spiders has to combat these annoying creatures creeping up the wall. The distance at which the next spider appears is dictated by the challenge level at play which in turn is governed by the adaptation policy, optimally designed to ensure matching user progress. The game
favours bidirectional movements including elevation/depression and abduction/adduction. 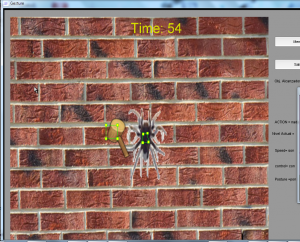 Spiders in the wall

Fungi in the sink

Cleaning time. The sink is dirty and the patient has to clean the mold stains. Similarly, the distance at which the next mold stain appears is dictated by the challenge level again ruled by the adaptation module. The game also favours bidirectional movements including elevation/depression and abduction/adduction. 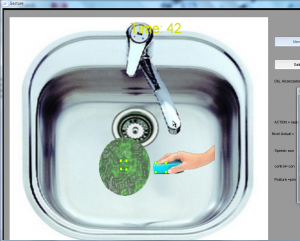 Fungi in the Sink