The home paradigm is our conceptualization that exercises promoted by the serious games should mimic natural movements inspired in functional tasks of daily living mostly occurring in the home environment, thus stressing the rehabilitation goal of making the patient self-sufficient (at home). Although the paradigm has been integral to GT for a while now [Oropeza Salas, 2012], it has not been until recently that we have developed a brand new interface that really exploits this paradigm. The new interface integrates the menus to be navigated by the patient within different views of a house from outside and from the inside as illustrated in Figure. A lighting effect highlights buttons as the user crosses above them with the cursor. Currently, navigation through the interface is made by means of the mouse, but we expect the GT gripper to be also an optional input device for the interface very soon, thus further facilitating the use by the impaired person without help from thirds. 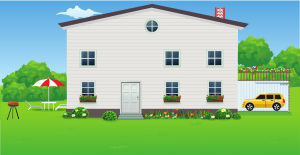 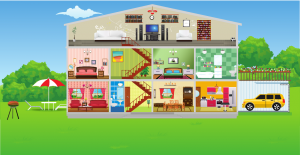